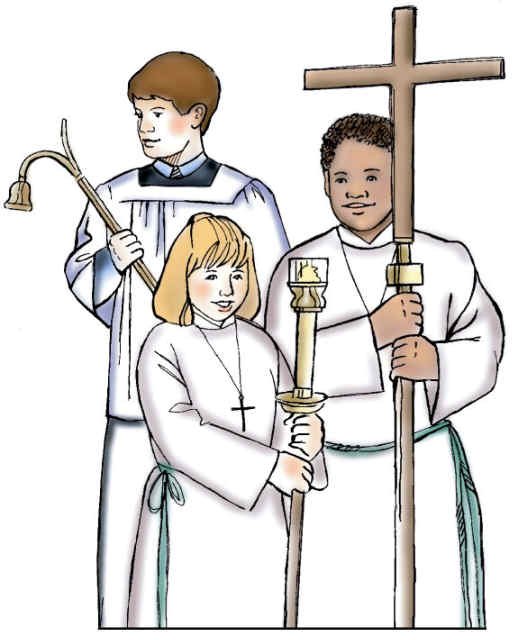 The ministry of Altar Server is an opportunity for boys and girls in the fourth grace and older who have received their First Communion to assist the Priest and the entire assembly at Mass on Sundays and other special occasions. Altar Servers, vested in a white alb with a cincture and cross, carry the processional cross and candles, hold the Missal for the Priest, carry the incense and thurible, prepare the altar, and washes the hands of the Priest. Servers also respond to the prayers and sing the hymns with the rest of the assembly. Altar Servers fully, actively, and consciously participate in the liturgy.

Prayer of An Altar Server
O God, You have graciously called me to serve You upon Your altar. Grant me the graces that I need to serve You faithfully and wholeheartedly. Grant too that while serving You, I may follow the example of St. Tarcisius, who died protecting the Eucharist, and walk the same path that led him to Heaven.
St. Tarcisius, pray for me and for all servers.
-Amen
Guidelines

All servers should be dressed appropriately. When you cross the nave (central aisle), you should always bow your head to the tabernacle…
Read More

Nave: The main portion of the Church where the pews and sanctuary are located. Reconciliation Room: The room in the far right…
Read More

Sign up for Masses you intend to serve during Christmas.
Read More