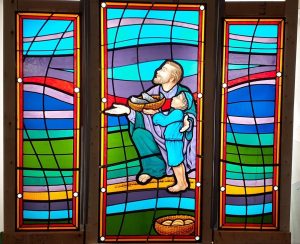 Participating in Christ’s Work
After these things, Jesus went away across the sea of Galilee – that is, the sea of Tiberius. A great crowd was following him, because they were watching the signs which he did on those who were ill. Jesus went up to the hill and he was sitting there with his disciples. When Jesus lifted his eyes and saw that a crowd was coming to him, he said to Philip, “Where are we to buy bread for these to eat?” He was testing Philip when he said this, for he knew himself what he was about to do. Philip answered, “Six month’s wages would not be enough to give each of them even a little to eat.” One of the disciples said to Jesus – it was Andrew, Simon Peter’s brother – “There is a child here who has five barley loaves and two little fish. But what use are they among so many?”

Notice Philip’s joy in responding to the Lord’s invitation to participate in the miracle about to be revealed. See the generosity expressed in the image of the little boy with his loaves and fish- joy and generosity born in hearts full of love.